Age is like the latest version of a software — it has a bunch of great new features but you lost all the cool features the previous version had. ~Terri Guillemets, "Thirties and beyond," 2006
Today is day 19 of the Phoenix Paper Crafters Create Daily Challenge located HERE .
I missed day 18 because of this card which I am not sure I really like to be honest! 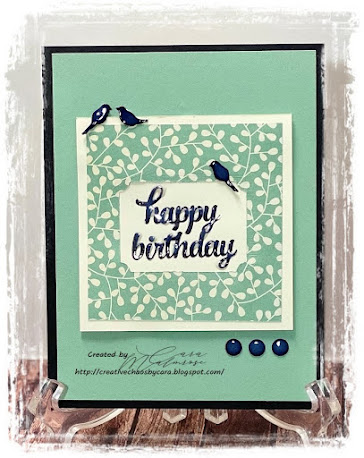 Part of the card front is from a salvaged card that I got who knows where. I matched the cardstock to the design paper best I could and added some left-over die cut birds I had in my die cut basket.
I then punched out three small circles and added to the card front. I do this all the time when I want to add embellishments to a card but either don’t have the right colors or size I want.
To jazz them up a bit I had Judikins diamond glaze to them. Sometimes I add glitter glue before topping with the diamond glaze.
But it this case, the three circles I punched are still cloudy with a bit of a blue look. I rarely have issues with this process and though maybe because the house was bit cold, so I waited and it never cleared up. Now I am wondering if the cardstock I used released some die into the wet glaze.
Thanks for stopping by!
Cara